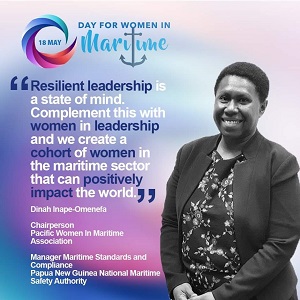 PacWIMA wishes everyone a wonderful Day for Women In Maritime (D4WIM).

This year, a one-week online campaign commenced on the 18 May, celebrating the Day for Women In Maritime with the theme “Women in Maritime: Resilience and Leadership amidst a global pandemic”. The themes for IWD 2021 (Women in leadership: Achieving an equal future in a COVID-19 world) and WMD 2021 (Seafarers: at the core of shipping’s future) were used as a basis to consider the D4WIM theme for 2021.

We appreciate you walking this journey with us to advocate for #SDG5 in our maritime sector as we showcase “Women in Maritime: Resilience and Leadership amidst a global pandemic”.

Day for Women In Maritime

Watch some amazing video messages in 2020

About the Day For Women In Maritime Logo

The anchor represents strength with the international women’s sign to acknowledge and honour women around the world for their contribution to society.

The significance of a Day for Women In Maritime –

Why a Day for Women In Maritime?  Globally, women represent only 2% of the 1.2 million seafarers.  In the Pacific, it is estimated that there are some 16000 persons working in the maritime sector and of this, only less than 11% are women (sea-based/shore-based).

Giving prominence to a Day for Women In Maritime will focus on women in, and intending to join the maritime sector and encourage Governments, Maritime Administrations, the Ship Owners, Ship Operators, all relevant agencies to promote and take action to celebrate the day meaningfully. This is a way to keep the conversation going, to set targets and see some tangible outcomes with more women in leadership roles, with more women being visible, with more women having access to capacity building opportunities.

We are looking at the D4WIM to become a global phenomenon envisaged to be celebrated annually, with a vision that the D4WIM becomes an IMO recognized annual event in addition to the Seafarers Day and the World Maritime Day.

Watch these amazing video messages from around the globe. We thank you for your continuous support!

Day For Women In Maritime 2021

This is our story